The Ehsan Yarshater Lecture Series presentations at UCLA, which has a counterpart at the Collège de France, are delivered by a distinguished scholar whose work has impacted the study of the Iranian Civilization.  Each biennial lecture series consists of four to five lectures on a single theme that is elaborated and amplified into a monograph.  The 2020 Biennial Ehsan Yarshater Lecture Series honored guest lecturer is Professor Daniel Potts. 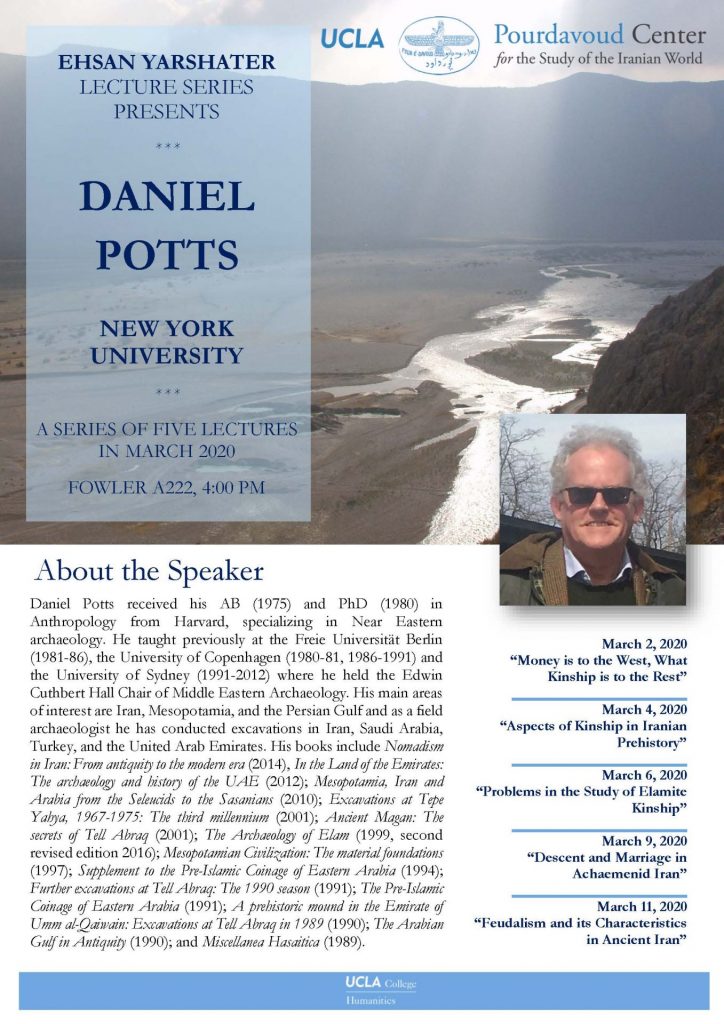 Daniel Potts received his AB (1975) and PhD (1980) in Anthropology from Harvard, specializing in Near Eastern archaeology. He taught previously at the Freie Universität Berlin (1981-86), the University of Copenhagen (1980-81, 1986-1991) and the University of Sydney (1991-2012) where he held the Edwin Cuthbert Hall Chair of Middle Eastern Archaeology. His main areas of interest are Iran, Mesopotamia and the Persian Gulf and as a field archaeologist he has conducted excavations in Iran, Saudi Arabia, Turkey and the United Arab Emirates. The founding editor-in-chief of the journal Arabian Archaeology & Epigraphy, he is a Corresonding Member of the German Archaeological Institute and ISMEO (Associazione Internazionale di Studi sul Mediterraneo e l’Oriente). His books include Nomadism in Iran: From antiquity to the modern era (2014), In the Land of the Emirates: The archaeology and history of the UAE (2012); Mesopotamia, Iran and Arabia from the Seleucids to the Sasanians (2010); Excavations at Tepe Yahya, 1967-1975: The third millennium (2001); Ancient Magan: The secrets of Tell Abraq (2001); The Archaeology of Elam (1999, second revised edition 2016); Mesopotamian Civilization: The material foundations (1997); Supplement to the Pre-Islamic Coinage of Eastern Arabia (1994); Further excavations at Tell Abraq: The 1990 season (1991); The Pre-Islamic Coinage of Eastern Arabia (1991); A prehistoric mound in the Emirate of Umm al-Qaiwain: Excavations at Tell Abraq in 1989 (1990); The Arabian Gulf in Antiquity (1990); and Miscellanea Hasaitica (1989). He is the editor of the two volume Blackwell Companion to the Archaeology of the Ancient Near East (2012) and the Oxford Handbook of Iranian Archaeology (2013).