Between City and Shtetl: A Comparative Look at Contemporary Hasidic Life 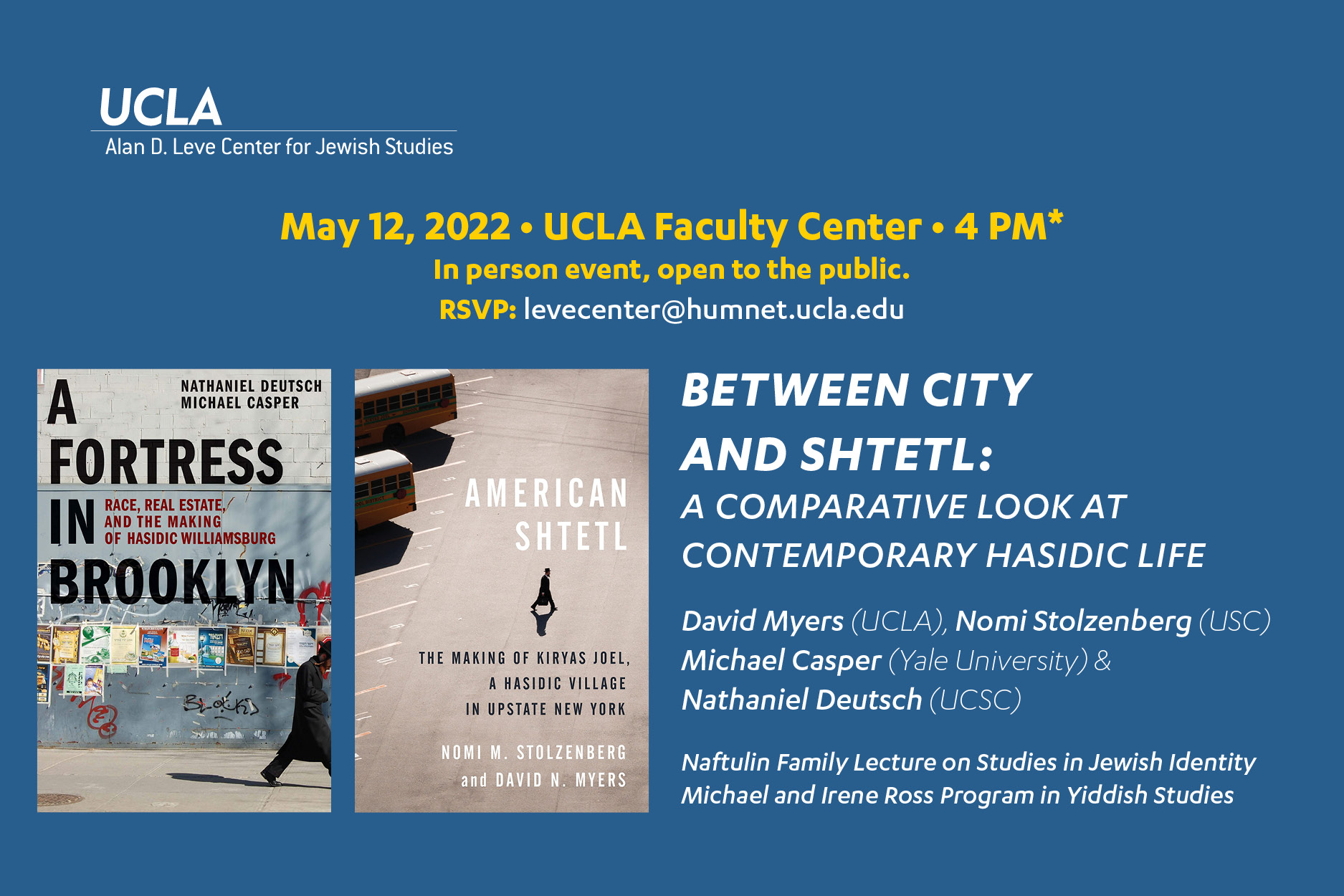 Join us for “Between City and Shtetl: A Comparative Look at Contemporary Hasidic Life,” an upcoming joint book talk featuring current and former Leve affiliates. This talk brings together David N. Myers (UCLA) and Nomi M. Stolzenberg (USC), authors of American Shtetl: The Making of Kiryas Joel, a Hasidic Village in Upstate New York, with Michael Casper (PhD in History, UCLA 2019) and Nathaniel Deutsch (UCSC), authors of A Fortress in Brooklyn: Race, Real Estate, and the Making of Hasidic Williamsburg, for a scintillating discussion on these exciting new books on the Hasidim of New York.

A Fortress in Brooklyn Race, Real Estate, and the Making of Hasidic Williamsburg by Michael Casper and Nathaniel Deutsch

The Hasidic community in the Williamsburg section of Brooklyn is famously one of the most separatist, intensely religious, and politically savvy groups of people in the entire United States. Less known is how the community survived in one of the toughest parts of New York City during an era of steep decline, only to later resist and also participate in the unprecedented gentrification of the neighborhood.

Nathaniel Deutsch and Michael Casper unravel the fascinating history of how a group of determined Holocaust survivors encountered, shaped, and sometimes fiercely opposed the urban processes that transformed their gritty neighborhood, from white flight and the construction of public housing to rising crime, divestment of city services, and, ultimately, extreme gentrification. By showing how Williamsburg’s Hasidim rejected assimilation while still undergoing distinctive forms of Americanization and racialization, Deutsch and Casper present both a provocative counter-history of American Jewry and a novel look at how race, real estate, and religion intersected in the creation of a quintessential, and yet deeply misunderstood, New York neighborhood.

Settled in the mid-1970s by a small contingent of Hasidic families, Kiryas Joel is an American town with few parallels in Jewish history—but many precedents among religious communities in the United States. This book tells the story of how this group of pious, Yiddish-speaking Jews has grown to become a thriving insular enclave and a powerful local government in upstate New York. While rejecting the norms of mainstream American society, Kiryas Joel has been stunningly successful in creating a world apart by using the very instruments of secular political and legal power that it disavows.

Nomi Stolzenberg and David Myers paint a richly textured portrait of daily life in Kiryas Joel, exploring the community’s guiding religious, social, and economic norms. They delve into the roots of Satmar Hasidism and its charismatic founder, Rebbe Joel Teitelbaum, following his journey from nineteenth-century Hungary to post–World War II Brooklyn, where he dreamed of founding an ideal Jewish town modeled on the shtetls of eastern Europe. Stolzenberg and Myers chart the rise of Kiryas Joel as an official municipality with its own elected local government. They show how constant legal and political battles defined and even bolstered the community, whose very success has coincided with the rise of political conservatism and multiculturalism in American society over the past forty years.

Timely and accessible, American Shtetl unravels the strands of cultural and legal conflict that gave rise to one of the most vibrant religious communities in America, and reveals a way of life shaped by both self-segregation and unwitting assimilation.