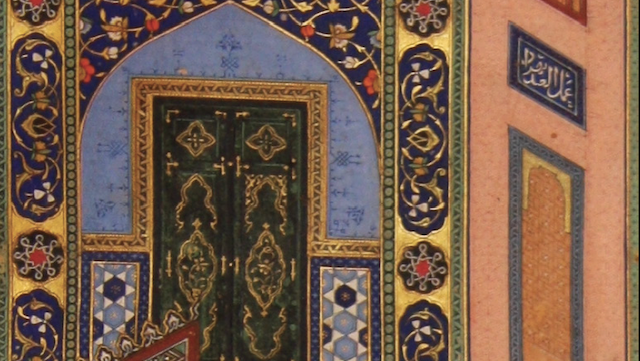 Margaret Graves (Associate Professor of Islamic Art and Architecture, Indiana University), Domenico Ingenito (Assistant Professor of Classical Persian, UCLA), and Kishwar Rizvi (Professor of Islamic Art and Architecture, Yale University) will discuss The Making of the Artist in Late Timurid Painting (Edinburgh University Press, 2019), recently published by Lamia Balafrej (Assistant Professor of the Arts of the Islamic World, UCLA). This book constitutes the first exploration of artistic self-reflection in Islamic art. It reveals how artists used aspects of line, composition, and color to convey ideas about authorship, medium, and representation in Persian painting and drawing.

Lamia Balafrej specializes in the arts of the medieval and early modern Islamic world. Her teaching and research interests include painting and the arts of the book, intersections of materiality and aesthetic, art and its relation to labour and ecology, cross-cultural exchange. Her book, The Making of the Artist in Late Timurid Painting, reveals how artists engaged with theories of authorship in Persian painting, using aspects of composition, facture, and representation to define artistic authority. Professor Balafrej has also published on cross-cultural relations in the Medieval Mediterranean, iconoclasm’s paradoxical iconophilia, and women artists from the Middle East. Her work has been supported by grants and fellowships from various institutions, including the Forum Transregionale Studien (Berlin, Germany), the Marion and Jasper Whiting Foundation, the Metropolitan Museum of Art (New York, NY), and the Smithsonian Institution (Washington, DC). Before coming to UCLA, she taught at Wellesley College. She studied literature and art history at the University Mohammed V (Rabat, Morocco), the Ecole Normale Supérieure of Paris, and Paris Sorbonne, and received her Ph.D. in art history from the University of Aix-Marseille.

Margaret S. Graves is associate professor of Islamic art and architecture at Indiana University. She received her PhD from the University of Edinburgh in 2010. She is a specialist in the plastic arts and has published articles, books and exhibition catalogues on medieval and nineteenth-century artistic production of the Islamic world, including her recent monograph Arts of Allusion: Object, Ornament, and Architecture in Medieval Islam (Oxford University Press, 2018). Current projects include an article on medieval perceptions of the image as process and performance, and a book about the effects of the art market on the collected canon of Islamic ceramics.

Domenico Ingenito is the director of the Program on Central Asia and assistant professor of Classical Persian at UCLA. His research interests center on premodern Persian poetry (in particular the history of lyric genres at the intersection of eroticisms and politics), rhetoric and prosody, hermeneutics, anthropology of ritual and symbolic representations (concepts of kingship, death elegies, poetry as a ritualized cultural performance), comparative literature (including Italian, Portuguese, Spanish, and Catalan), hermeneutics, and translations studies. Among his publications: “Tabrizis in Shiraz are worth less than a dog: Saʿdī and Humām, a lyrical encounter,” in Politics, Patronage and the Transmission of Knowledge in 13th–15th Century Tabriz, ed. J. Pfeiffer, Brill, 2013; “Jahan Malik Khatun: Gender, Canon, and Persona in the Poems of a Premodern Persian Princess.” Forthcoming publications include: Beholding Beauty: Sa‘di and the Persian Lyric Tradition (book manuscript); ‘Obayd Zākāni: Canzoni d’amore e versi osceni (book manuscript); “Mahmud’s New Garden in Balkh: Practicing Literary Archeology”; and “Hafez’s ‘Shirāzi Turk’: a Geopoetical Approach.” Domenico was a lecturer in Persian Literature at the University of Oxford (UK) from 2011 through 2013, and since 2010 he has taught Persian language and literature at the Harvard and Koç Universities Summer School in Ottoman Studies.

Kishwar Rizvi is Professor of Islamic Art and Architecture at Yale University.  Her recent publications include The Transnational Mosque: Architecture and Historical Memory in the Contemporary Middle East (University of North Carolina Press, 2015), for which she was selected as a Carnegie Foundation Scholar, and Emotion, and Subjectivity in Early Modern Muslim Empires: New studies in Ottoman, Safavid, and Mughal art and culture, editor, (Brill, 2017).  Her earlier publications include The Safavid Dynastic Shrine: History, religion and architecture in early modern Iran (British Institute for Persian Studies, I. B. Tauris, 2011) and the anthology, Modernism and the Middle East: Architecture and politics in the twentieth century (University of Washington Press, 2008), which was awarded a Graham Foundation publication grant.