Ancient Persia and the West: An International Symposium 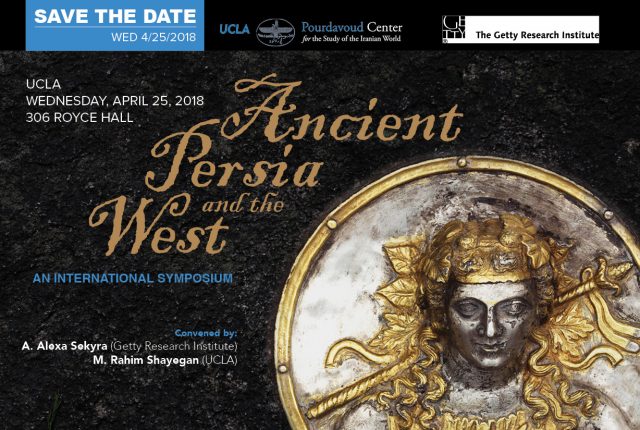 The Pourdavoud Center for the Study of the Iranian World and the Getty Research Institute are co-organizing a one-day symposium to be held on April 25, 2018 at the Pourdavoud Center, UCLA. Presenters will include invited speakers and the current Getty Villa Scholars, whose projects focus on the encounters of ancient Iran with the classical world.

The Getty Scholars Program at the Villa for the 2017–18 and the 2018–19 years address the political, intellectual, religious, and artistic relations between Persia, Greece, and Rome from the ninth century BC to AD 651. The Greeks viewed the Persian Empire, which reached from the boarders of Greece to India, as a vastly wealthy and powerful rival and often as an existential threat. When the Macedonian king Alexander the Great finally defeated the Persians in 331 BC, Greek culture spread throughout the Near East, but native dynasties—first the Parthian (247 BC—AD 224) and then the Sasanian (AD 224—651)—soon reestablished themselves. The rise of the Roman Empire as a world power quickly brought it, too, into conflict with Persia, despite the common trade that flowed through their territories.