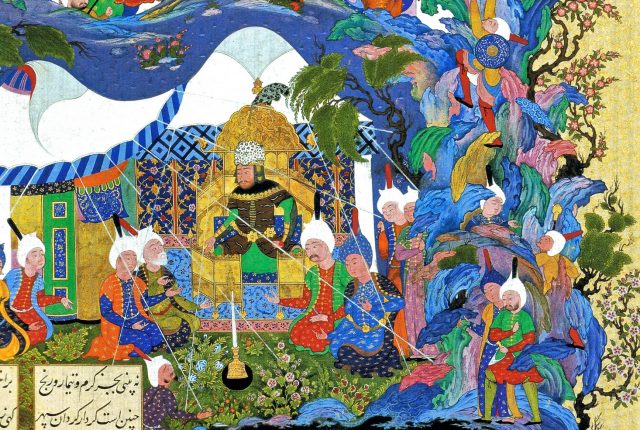 Dr. Khafipour discusses the spiritual dimensions of political loyalty that was instrumental in the formation of strong ties between the Safavid rulers and their chiefs at the epicenter of the order, where power was continually contested. Drawing on a wide variety of historical and literary sources, Islamic theology, and theories of power, he discusses the anatomy of political loyalty among the early Safavids within the context of early modern state formation and posits that hierarchies of spiritual power inherent in Sufi orders and sacrosanct mutual obligations that inform pir-murid interactions helped to create a strong patronage system that offered the early Safavids the ideological sources for long term success as a political order.

Hani Khafipour received his doctorate from the University of Chicago. He is a specialist in the history of medieval and early-modern Iran. His research encompasses study of the structures of political orders, theories of power and state formation, sociolinguistics and critical discourse analysis. He has held research fellowships from the Iran Heritage Foundation (UK), and the American Institute of Iranian Studies.

He was an Andrew W. Mellon fellow, and a fellow of the Roshan Cultural Heritage Institute. Khafipour teaches courses on Islamic political thought and theory, and medieval and modern history of Iran at the University of Southern California. His recent research and teaching interests have culminated in an edited volume, Empires of the Near East and India: Source Studies of the Safavid, Ottoman, and Mughal Literate Communities (Columbia University Press, 2017), and a book manuscript, The Mantle of Authority in an Early Modern Society (under preparation). He is the current History of Iran Section Editor for the Encyclopedia of Islam 3, Brill.